Max, Madeleine, and Brighton
Jonathan Kolia "Jon" Favreau is an American actor, director, producer, and screenwriter. He is best known for directing the 2003 Christmas comedy film, Elf. He also voiced Reilly the beaver in Sony Pictures' Open Season and its sequel, and Jerome the Grizzly Bear in Zookeeper.

For Disney, he portrayed Happy Hogan in Iron Man, Iron Man 2, Iron Man 3, Spider-Man: Homecoming, Avengers: Endgame and Spider-Man: Far From Home. He also served as director and executive producer for Iron Man and Iron Man 2. The first Iron Man film was made before Disney acquired Marvel. Additionally, he served as an executive producer for The Avengers, Iron Man 3, Avengers: Age of Ultron, Avengers: Infinity War, and Avengers: Endgame. Additionally, he voiced Pre Vizla in Star Wars: The Clone Wars, and played Rio Durant in Solo.

As the director of the 2016 live-action Jungle Book, Favreau aimed to amalgamate the spirit of Disney's The Jungle Book with the faithfulness and storytelling of Rudyard Kipling's original tale. He used Kipling's rendition of The Jungle Book as an opportunity to kick-start Neel Sethi's career into stardom. He also directed the live-action 2019 film, The Lion King, a remake of the 1994 film. Favreau was named a Disney Legend in 2019 as an executive producer on the Disney+ series The Mandalorian and voices Paz Vizla on the show. 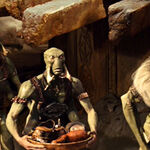 Rio Durant
(Solo)
Add a photo to this gallery

Jon Favreau at premiere of Iron-Man in April 2008.

Jon Favreau at premiere of G-Force in July 2009.

Jon Favreau speaks at the Revolution panel at the 2012 Summer TCA Tour.

Jon Favreau at the premiere of The Jungle Book in April 2016.

Jon Favreau at the premiere of Avengers: Infinity War in April 2018.

Jon Favreau at premiere of The Lion King remake in July 2019.

Jon Favreau at the Disney Legends event at the 2019 D23 Expo.

Jon Favreau arrives at the 77th annual Golden Globes in January 2020.
Add a photo to this gallery