For Disney, he played J.B. Bernstein in the 2014 biographical film, Million Dollar Arm. He also voiced Cartoon Lord Hater in Wander Over Yonder. He also voiced Louis in Big City Green and he played Mark Goodwin in Lucy in the Sky. 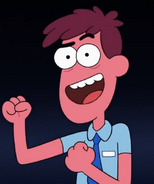 Louis
(Big City Greens)
Add a photo to this gallery

Jon Hamm at the 2010 Vancouver Olympics.

Jon Hamm at the 2012 BAFTA Awards with Miss Piggy.

Jon Hamm at premiere of Million Dollar Arm in May 2014.

Jon Hamm speaks onstage at the 23rd Hollywood Film Awards in November 2019.
Add a photo to this gallery

Retrieved from "https://disney.fandom.com/wiki/Jon_Hamm?oldid=3895657"
Community content is available under CC-BY-SA unless otherwise noted.