Not being well-known, rejection

Active
All American Boy, also known as Mr. Boy, is a minor character from the film Sky High. His first name is Jonathan.

All American Boy can leap across vast distances, as shown when he caught Jetstream when the latter was Pacified, before she could fall to her death, a fall which would have been fatal owing to the fact she was a baby.

Jonathan now works as Hero Support teacher at Sky High. Though he tries to appear chipper and tries to inspire his students he is quite clearly unhappy and living in past glory. At some point he made and gave scrapbooks for The Commander. He is saddened that Will Stronghold didn't know who he was even though he worked with his father. He still does a little freelance Hero Support on the side. 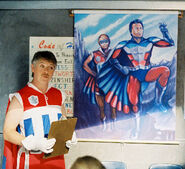 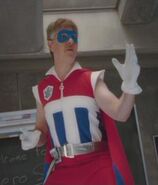