Jameson Ivor Frakes
Elizabeth Francis Frakes
Jonathan Scott Frakes is an American actor, voice actor, author, TV host, and director who is best known for his role as Commander William T. Riker in Star Trek: The Next Generation and all of its feature films. He also hosted the sci-fi series Beyond Belief: Fact or Fiction.

His known Disney roles are David Xanatos and Coyote in Gargoyles, J'son in Guardians of the Galaxy, Bob Spiegel in Camp Nowhere, Vincent Callisto in Miles from Tomorrowland, and Steak Starbolt in Future-Worm!. He also directed the Agents of S.H.I.E.L.D. episode "The Well". 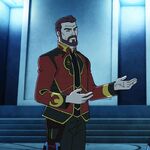 J'son
(Guardians of the Galaxy)
Add a photo to this gallery

Jonathan Frakes behind the scenes of Miles from Tomorrowland.
Add a photo to this gallery

Retrieved from "https://disney.fandom.com/wiki/Jonathan_Frakes?oldid=4433116"
Community content is available under CC-BY-SA unless otherwise noted.