1972-present
Jonathan Freeman is an American actor, voice actor, singer, and puppeteer who is best known for being the puppeteer and voice of Tito Swing on Shining Time Station from 1989 to 1995.

For Disney, he's known for voicing Jafar and Ding from the Aladdin franchise. He also played Grimsby in The Little Mermaid musical and Cogsworth in Beauty and the Beast on Broadway, and is currently reprising Jafar for the Aladdin stage musical on Broadway. Also for Disney, he is known for voicing Eli Excelsior Pandarus and Jack Frost in the Disney Channel animated series American Dragon: Jake Long.

Grimsby in the Little Mermaid Musical

Jafar in the Aladdin Musical 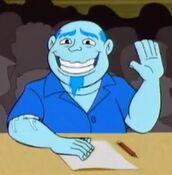 Jack Frost
Add a photo to this gallery

Jonathan Freeman reprising his role as Jafar in the Broadway adaptation.

Retrieved from "https://disney.fandom.com/wiki/Jonathan_Freeman?oldid=3032804"
Community content is available under CC-BY-SA unless otherwise noted.