Richard Harris
Jonathan Harris was an American stage and film character actor best known for the role of Dr. Smith in the 1960s television show Lost in Space.

For Disney, he voiced Manny in the 1998 Disney/Pixar film, A Bug's Life and reprised the role again in the video game, Geri the cleaner in the 1999 Disney/Pixar film Toy Story 2, Ajed Al-Gebraic in the Aladdin episode "Genie Hunt", Henry Villanova in the Quack Pack episode"Transmission: Impossible", and Era in Buzz Lightyear of Star Command.

He died 3 days before his 88th birthday. 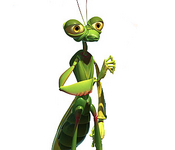 Era
(Buzz Lightyear of Star Command)
Add a photo to this gallery
Retrieved from "https://disney.fandom.com/wiki/Jonathan_Harris?oldid=3936655"
Community content is available under CC-BY-SA unless otherwise noted.