This article is about the character Jordan from Recess. For other characters, see Jordan (disambiguation).

Jordan is a character on the Recess television series.

Jordan is one of King Bob's servants, normally partnered with Jerome.

He is a sixth grader and is a lot rounder than his partner. He wears a green sweatshirt, glasses and blue jeans. 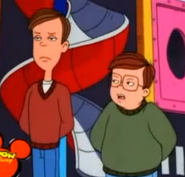 Retrieved from "https://disney.fandom.com/wiki/Jordan?oldid=3200357"
Community content is available under CC-BY-SA unless otherwise noted.