Composer, musician
José do Patrocínio Oliveira, known by the pseudonym Zé Carioca, was a Brazilian composer and musician who was the original voice of José Carioca. Coincidentally, the character he voiced has the same first name as him, while the character's last name is the same as his pseudonym.

Self-taught on musical instruments, Zé Carioca played the guitar, ukulele, and banjo. He worked as an employee of the Butantan Institute in São Paulo. In 1931, he went on to perform at the Columbia Orchestra, directed by Odmar Amaral Gurgel conductor at Radio Cruzeiro do Sul. At that time, he exchanged the ukulele by banjo, earning him the nickname Zezinho do Banjo. In 1932, he went to Rio de Janeiro, through César Ladeira, to perform at Radio Mayrink Veiga. At that station, he worked alongside the great composers of that period: Garoto, Pixinguinha, Nélson Souto, among others. When Ladeira became artistic director of the Cassino da Urca, took Zé Carioca to perform at the famous carioca casino. Was where he met Carmen Miranda in 1939.

By the 1940s, Zé Carioca started to work alongside Carmen Miranda together with the Bando da Lua in several movies from 20th Century Fox, initially participated only in the soundtrack, and then also in the scene. It was at this time that he met Walt Disney, through Aloysio de Oliveira, starting to dub studio cartoon characters. The contact with Disney inspired the American producer to create the character José Carioca. He became a celebrity with the film Saludos Amigos, released in 1942, and became even more popular with another Disney film, The Three Caballeros, released in 1944 with Aurora Miranda. 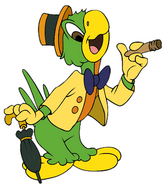 Retrieved from "https://disney.fandom.com/wiki/Jos%C3%A9_Oliveira?oldid=4113068"
Community content is available under CC-BY-SA unless otherwise noted.