1
Joshua Browning Carter Jackson is a Canadian actor. He has appeared in prime time television and in over 32 film roles. He is known for playing Pacey Witter in Dawson's Creek and Peter Bishop in Fringe. He also voiced Trenton's Pride in the 2005 comedy Racing Stripes.

For Disney, he played Charlie Conway in The Mighty Ducks trilogy and had a cameo providing additional voices on Gravity Falls. 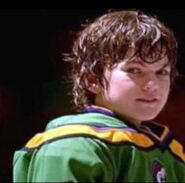 Charlie Conway
(The Mighty Ducks)
Add a photo to this gallery

Joshua Jackson and his then girlfriend, Diane Kruger attending the 72nd annual Golden Globes in January 2015.
Add a photo to this gallery
Retrieved from "https://disney.fandom.com/wiki/Joshua_Jackson?oldid=4492601"
Community content is available under CC-BY-SA unless otherwise noted.