"Journey Into Your Imagination"
Journey into Imagination was an attraction at the Epcot theme park at Walt Disney World Resort which opened on March 3, 1983.

It has been through three incarnations over the years, being replaced by Journey Into Your Imagination in 1999 and the current Journey Into Imagination With Figment in 2002, though the original is considered the best of them. All three of them have featured Figment, a small purple dragon, as a character.

The ride also used the Omnimover system and featured the song "One Little Spark" lyrically or instrumentally, with it being the basis of the score in the original and current versions.

Journey into Imagination and the rest of the Epcot pavilion were late additions to the plans for Epcot. When Tony Baxter's ideas for The Land pavilion were turned down, he turned his attention to Kodak's pavilion. Requesting a pavilion based around the Imagination, Tony and his team went through a six-month process of figuring out how best to tell a story about the creative process, settling on the basic three steps of gathering, storing and recombining ideas, which would provide the attraction's structure.

The characters they would create would be derived from the canceled Discovery Bay project for Disneyland. One of the attractions, Professor Marvel's House of Illusions, featured a bearded scientist who had a hobby of breeding dragons, which would evolve into Dreamfinder and Figment. The inspiration for Figment would also come from Tony Baxter watching Magnum P.I..

““I was watching Magnum PI […] on TV. He was in the garden and the butler, Higgins, had all these plants and they were all uprooted. It was a mess. Magnum had been hiding a goat out there and the goat had eaten the plants. Higgins said, ‘Magnum! Magnum! Come out here! Look at this! Something has been eating all the plants in the garden.’ And Magnum says, ‘Oh, it’s just a figment of your imagination.’ And Higgins said, ‘Figments don’t eat grass!’ I thought, ‘There is this name, the word ‘figment’ that in English means a sprightly little character. But no one has ever visualized it, no one had ever drawn what a figment is. So, here is a great word that already has a great meaning to people, but no one has ever seen what one looks like.’ So we had the name that was just waiting for us to design the shape for it.””
―Tony Baxter

The attraction's most unique feature, the turntable that allowed for a "stationary" scene on an Omnimover attraction, would be one of the most difficult parts of the attraction to develop and the first thing to go when the attraction was replaced. The vehicles would lock into place on one of five identical scenes like cogs and then unlock to go onto the track containing the rest of the attraction.

The attraction began with the ride vehicles “floating” in the clouds and seeing the animated silhouette of a strange blimp mixed with a vacuum cleaner and hearing the humming and singing of its pilot. In the next scene, the guests came right next to this vessel and the pilot, an old man with a red beard dressed in a blue suit and top hat, introduces himself as the Dreamfinder and saying that he uses his vehicle (called the Dream Mobile or Dream-Catcher by some fans) to collect dreams and ideas to create all sorts of new things. Soon, he created a figment of his imagination who came up from a pot near the back of the Dream Mobile. This figment was, appropriately, named Figment--he then proceeded to come up with enough ideas to fill the Dream Mobile’s ideal bag, all of which would show up later in the ride. Dreamfinder then told Figment that before they could create something, they had to go back to the Dreamport, which he said was never far away when you used your imagination.

The ride vehicles then left the side of the Dream Mobile and entered the Dreamport’s storage room, which included a massive washing machine like device for sorting ideas. Also in the room were numerous objects, including a chest full of applauding pairs of hands, plasma balls, and a birdcage filled with musical notes. After leaving the storage room, guests would then travel through several Realms of Imagination based on Art, Literature, the Performing Arts, and Science.

The Art room was mostly white-colored (probably to represent a massive canvas) and had a large painting that Dreamfinder was made using a large fiber optic paintbrush, a carousel with giant origami animals, and a pot of rainbows held by Figment near a pond.

The Literature room was mostly focused on suspenseful tales and had Dreamfinder playing a massive computer-like organ with letters and words coming out of it, words that transformed into their meanings, a massive book featuring the raven from the Edgar Allan Poe poem cawing menacingly and books of horrible monsters that Figment tried to keep closed.

The Performing Arts room had Figment trying on costumes backstage while Dreamfinder conducted a laser light show similar to an orchestra conductor.

The last of the rooms, Science, featured a large machine that Dreamfinder was operating that took a closer look at the workings of nature such as the growth of plants, the formation of crystals from minerals, and looking into space.

In the end, Dreamfinder told Figment and the guests that Imagination was our key to unlock the hidden wonders of our world. The guests then entered the final show scene as their picture was taken. In the following room, Figment stood in the center of a giant film canister, surrounded by several movie screens of him being a scientist, a mountain climber, a pirate, a superhero, a tap dancer, a ship captain, a cowboy, and an athlete. Dreamfinder, sitting behind a movie camera, gave one last inspiring message and told guests to use their newly-found sparks of inspiration in the Image Works and the on-ride photo was shown to the guests on a screen next to Dreamfinder.

It was featured in The Muppets at Walt Disney World, where Scooter and Bean Bunny were playing around at the leaping fountains.

The ride closed on October 10, 1998 to the dismay of numerous fans. 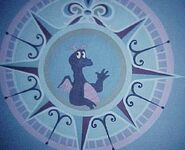 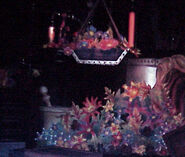 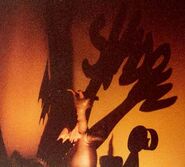 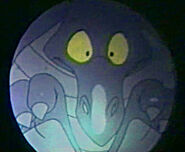 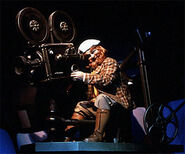