Tarzan Rocks!
Journey into the Jungle Book was a musical show based on the film The Jungle Book that took place in the "Theater in the Wild" at Disney's Animal Kingdom from the grand opening to 1999.

Retelling the story of the movie, the show employs a new breed of "hum-animals", highly mobile costumed characters combining human performers and innovative puppetry. The result is animals of fantasy that convey life-like realism and emotion. Many of the new costumes do double duty, allowing performers to appear as bushes or trees, then suddenly reveal themselves as dancing animals. Some of the costumes contain two or more performers. Some have human front and puppet rear sections. 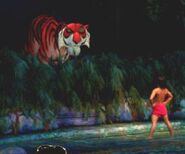