Journey to the Frozen Planet

Miles from Tomorrowland
"Journey to the Frozen Planet"

February 6, 2015
"Journey to the Frozen Planet" is the first segment of the fourth episode of Miles from Tomorrowland. It premiered on February 6, 2015 alongside "Attack of the Flickorax".

While their dad is making breakfast, Miles shows Loretta an old model kit of a bicycle and quickly puts it together. Loretta wishes to put it together the correct way, takes it a part and rebuilds it correctly, following the instructions but Miles doesn't want too. Just then their dad shows up with a dish of Anti-gravity pancakes for their breakfast. Miles and Loretta continue to quarrel over how the model should be made until their dad tells them to cool their boosters, reminding them of cosmic explorer rule #24: Some missions call for instructions and sometimes you have to find your own way. Just then Stella, the ship's computer, informs the Callistos of a incoming transmission from Tomorrowland Transit Authority. The whole family gathers at the bridge and are greeted by Admirals Watson and Crick who give them the assignment to head for an exoplanet known as Thurio to salvage a rover that was sent their to take measurements but froze due to the planet's extreme cold tempratures. To help them on their mission, the Admirals give the Callistos an new upgrade to their Questcoms, heat rays.

After the briefing, the Callistos board the Star Jetter and take off to the ice-covered planet Thurio. Soonafter landing on the surface, they discover the entire planet is almost made of ice and not to mention slippery as M.E.R.C. found out. They soon find the frozen Rover and while Phoebe and Leo lay a hardlight track for the Rover to climb up, Miles and Loretta are given the task to defrost the Rover from the ice. Loretta plans to use their new heat rays to melt the ice but she takes a long time reading the instructions on how to increase the power. Miles becomes impatient and decides on using M.E.R.C.'s rocket boosters to melt the ice. Frustrated by Miles' impatience, Loretta decides to go off somewhere to be alone and read her instructions. Unfortunately, due to not paying attention to where she is going, she falls down an icy hill and ends up at a purple river where she loses her Questcom.

Meanwhile, Miles and M.E.R.C. succeed in melting the ice off the Rover and just as the Callistos begin to tow it back to the ship, Phoebe comes to notice Loretta is missing. When they try to contact her and get no response, they assume that she may be in trouble and immediately go looking for her. Loretta remains trapped near the river. She tries climbing back and calling for help which all lead to no avail. Then after reading an instruction book, she launches an emergency flare which catches Miles and M.E.R.C.'s attention. They soon find Loretta but just then the iceberg she is on begins to break away and float away down the river. Worst of all, Loretta is heading straight for a waterfall. Thinking quick, Miles comes up with an idea by shooting his light cable across the river to his dad, then throwing his Lazerang to her. Loretta jumps off the iceberg and zip-lines across the river to safety. With the family reunited, Loretta thanks her little brother for saving her and admits that sometimes making up your own way can work better than following instructions.

After returning to the Stellosphere, Miles and Loretta have another build with the model bicycle, only this time without the usage of instructions, making it look different but cool compared to the way it is actually put together. 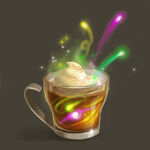 Leo brings out the skis

Miles and his Mom concerned about Loretta