Judge Davis is the main announcer of the air shows in Propwash Junction. He is a huge fan of the Falcon Hawks and Mater Hawk, commenting on of their moves at the air show in Air Mater.

Judge Davis makes a few minor appearances in the film Planes. His first appearance is at the qualifier of the Wings Around the Globe rally. He also reappears at the start of the WATG rally by saying to the racers, "Start your engines!"

Side-by-side comparison of Judge Davis and "Ina: The Macon Belle" 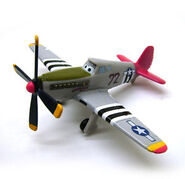