Finty Williams
Dame Judith Olivia "Judi" Dench, CH, DBE, FRSA is an English film, stage, and television actress, voice actress, occasional singer, and author, who is well known for her role as M in the James Bond films from 1995 to 2012. She received Academy Award nominations for her roles in Mrs Henderson Presents, Notes on a Scandal, and Philomena.

For Disney, she has voiced Mrs. Calloway in Home on the Range, the current narrator of Spaceship Earth, had a cameo as a wealthy woman in Pirates of the Caribbean: On Stranger Tides. She also played Queen Elizabeth in Shakespeare in Love, Queen Victoria in Mrs. Brown and Victoria and Abdul, Armande Voizon in Chocolat, Iris Murdoch in Iris, and Commander Root in Artemis Fowl. She was mentioned in an episode of BUNK'D and in an episode of Jessie.

Mrs. Calloway
(Home on the Range)

Commander Root
(Artemis Fowl)
Add a photo to this gallery 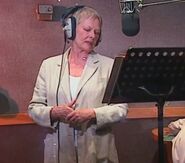 Judi Dench behind the scenes of Home on the Range.
Add a photo to this gallery
Retrieved from "https://disney.fandom.com/wiki/Judi_Dench?oldid=4501122"
Community content is available under CC-BY-SA unless otherwise noted.