Doug getting on her nerves, being ignored

Judy Funnie is quite the opposite of her little brother, Doug. In contrast to Doug's timid personality, Judy is very overly-dramatic (due to her being an aspiring actress) and will announce her feelings anytime she wants, and usually presents them in an over-the-top way, whether anyone is listening or not. Judy is very interested in modern art and theater arts, and is an actress and director for a number of stage performances. At times, she can be quite rude, mean, callous and sarcastic towards Doug and rub things in his face when he's feeling awful, to the point of sometimes being the antagonist for numerous episodes, but inside, she deeply cares for him and always makes sure he's alright. She usually refers to him by her affectionate nickname for him, "Dougie". She is greatly aware that Doug secretly likes Patti. Doug loves her very much, though for a good 75% of the time, he has no idea what she's talking about.

Role in the movie

Judy is a very minor character in the movie, and only appears in one scene. When Doug and Skeeter are bringing Herman Melville, the Lucky Duck Lake monster, up to Doug's room while in disguise as a scuba diver, Doug's mom stops them and thinks that Judy didn't clean off the mud on her shoes, thinking that Herman's disguse was one of Judy's stage costumes. Doug and Skeeter go along with it and clean up the muddy flipper prints on the floor.

Soon after, Judy arrives home from somewhere, with the boys still cleaning the floor. She asks sarcastically if someone vomited on the floor. Her mom gets mad at her, telling her to not say that because the boys were cleaning up "her mess". She then laughs at her mom and sarcastically goes upstairs ranting about how everyone thinks it's "her mess".

Judy in her pajamas 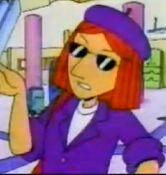 Retrieved from "https://disney.fandom.com/wiki/Judy_Funnie?oldid=4210508"
Community content is available under CC-BY-SA unless otherwise noted.