Michel Verne and stepdaughters Valentine and Suzanne Morel
Jules Gabriel Verne was a French author, who was among the first pioneers of the science fiction genre (along with H.G. Wells) He's best known for many of his stories which had been adapted by Disney to become films: In Search of the Castaways, Around the World in 80 Days, and most famously (because it's one of Walt Disney's masterpieces), 20,000 Leagues Under the Sea. In addition, his character Captain Nemo appeared in Once Upon a Time.

He is a main character in the former attraction The Timekeeper, where he discovers that all of the things he wrote about in his books have become possible. He was portrayed by Michel Piccoli. He also appeared in the Epcot attraction Horizons in a scene focused on his book, From the Earth to the Moon. Theme park adaptations of his work separate from any film counterpart including Space Mountain: De la Terre à la Lune at Disneyland Paris and Journey to the Center of the Earth at Tokyo DisneySea's Mysterious Island.

He was also mentioned by Quorra in the 2010 science fiction sequel to Tron, Tron: Legacy.

In Tomorrowland, he is a founding member of Plus Ultra.

Verne in the animated prologue for Tomorrowland 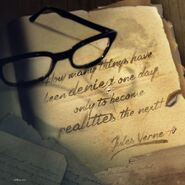 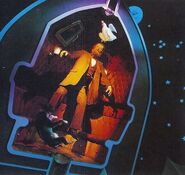 Verne in the original version of Space Mountain at Disneyland Paris
Add a photo to this gallery
Retrieved from "https://disney.fandom.com/wiki/Jules_Verne?oldid=4412551"
Community content is available under CC-BY-SA unless otherwise noted.