Henry and Charles
Julia Scarlett Elizabeth Louis-Dreyfus is an American actress, comedian, and producer who is best known for her roles as Elaine Benes on the NBC sitcom Seinfeld from 1989 to 1998, Christine "Old Christine" Campbell on the CBS sitcom The New Adventures of Old Christine from 2006 to 2010, and starred as Vice President Selina Meyer on the HBO comedy series Veep from 2012 to 2019.

For Disney, she is known for voicing Princess Atta in the 1998 Disney/Pixar film, A Bug's Life, and played the Blue Fairy in the ABC television film, Geppetto and Billie in the Fox film, Downhill, which she also produced. She also voiced Rochelle, who is the love interest for El Chupacabra, in the 2013 Disney animated film, Planes, and Heather Worthington in the Dinosaurs episode "Slave to Fashion", and she voiced Laurel Lightfoot in the 2020 Disney/Pixar film, Onward. 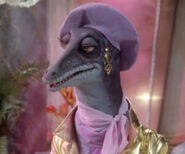 Laurel Lightfoot
(Onward)
Add a photo to this gallery

Julia Louis-Dreyfus behind the scenes of A Bug's Life.

Julia Louis-Dreyfus at her Hollywood Walk of Fame ceremony in May 2010.

Julia Louis-Dreyfus poses at the 64th Emmy awards in September 2012.

Julia Louis-Dreyfus behind the scenes of Planes.

Julia Louis-Dreyfus at the premiere of Planes in August 2013.

Julia Louis-Dreyfus at the premiere of Onward in February 2020.
Add a photo to this gallery
Retrieved from "https://disney.fandom.com/wiki/Julia_Louis-Dreyfus?oldid=4390162"
Community content is available under CC-BY-SA unless otherwise noted.