Hazel Patricia, Phinnaeus "Finn" Walter, and Henry Daniel
Julia Fiona Roberts is an American actress and producer. She is well known for her roles as the title character in the 2000 biographical drama Erin Brockovich. She also voiced Charlotte A. Cavatica, the titular deuteragonist of the 2006 live-action remake of Charlotte's Web.

For Disney, she played Vivian Ward in the 1990 Touchstone Pictures film, Pretty Woman, Sabrina Peterson in the 1994 film, I Love Trouble, and Margaret "Maggie" Carpenter in the 1999 film, Runaway Bride.

She is the younger sister of actor Eric Roberts and aunt of Emma Roberts. 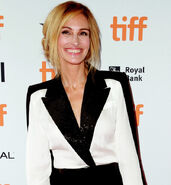 Julia Roberts speaks at the 91st annual Academy Awards in February 2019.
Add a photo to this gallery
Retrieved from "https://disney.fandom.com/wiki/Julia_Roberts?oldid=3804849"
Community content is available under CC-BY-SA unless otherwise noted.