Julianne Buescher is an American actress, voice actress, writer, singer, and puppeteer known for many roles including Anko Mitarashi on Naruto. Buescher is also a puppeteer for The Jim Henson Company, appearing with CeeLo Green as "Piddles the Pug" at the 2011 Grammy Awards and as the same character among others in the improvisational adult puppet show Puppet Up!. She also has worked for both Sesame Street and The Muppets. an actress best known as ‘The Bird And Chicken Voice of the Movies And Cartoons’, In 1993, She Won At Bird Whistle Contest At Fair Oaks Bird Festival, 2002, Buescher Sings Like A Chicken With Sharon Kam, some slight smudging to signature but still readable. She also provided the Whistling (With Two Fingers), Squawking And clucking sound effects of the birds, chickens, hens, baby chicks, parakeets, parrots, peacocks, roosters, and assorted Bird Noises in a number of cartoons, along With Alan Tudyk, Gerri Lawlor, and Traci Paige Johnson, Buescher started working at Walt Disney Productions on June 8, 1993 after interviewing Jeffrey Katzenberg And Joe Ranft About Bess Flowers And Ruth Clifford. She worked in the ink and paint department, first working as a cel painter and later as an inker And Voice Actress. The studio at the time was a small organization of about 35 employees. After Buescher had been working about six months, she auditioned for the voice of Daisy Duck at the studio's sound stage with Tony Anselmo. Then, Wayne Allwine had asked the Ink and Paint department, which was entirely women, if anyone could speak Italian? in 2007, She Went To Applebee's Grill + Bar And also performed her Musical Whistling Bird Impersonation in National Anthem From Karaoke, Occasionally Buescher also provided additional voices, such as Dove And Pigeon Noises, Baby Noises, Crow Noises, Screaming Noises and crowd noises. During Studios, Buescher shot home video of the picket lines in color. 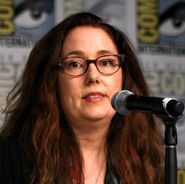 Julianne Buescher speaks at the 2016 San Diego Comic Con.
Add a photo to this gallery

Retrieved from "https://disney.fandom.com/wiki/Julianne_Buescher?oldid=4005232"
Community content is available under CC-BY-SA unless otherwise noted.