Juliet Capulet from the original play

Blue Gnomes (formerly), Moriarty
Juliet is the daughter of Lord Redbrick and his late wife, the love interest and later wife of Gnomeo and the female protagonist in the 2011 Touchstone Pictures film Gnomeo & Juliet and the female deuteragonist from 2018 sequel. She is based on Shakespeare's character Juliet.

She’s beautiful, delicates and pristine, at least according to her father, Lord Redbrick, the head of the Reds. As such, her place is right at the top of a grand fountain pedestal. Her accessory is a plastic red rose. Her best friend is a romance-obsessed frog named Nanette.

Juliet is just not cut out for this life, as she longs to get her hands dirty in the garden alongside the rest of the Reds. She tries to outstrip the Blue gnomes by getting a flower on top of a greenhouse, but after falling in love with a Blue, Gnomeo, she sees things in a new perspective.

Through help from Nanette, Featherstone, and others, she and Gnomeo are eventually wed in a relatively happy ending.

Juliet is first seen leaving her pedestal and climbing up a tree to get a better view of the Cupid's Arrow Orchid, a flower that was growing on top of the greenhouse in an abandoned garden. She's startled by her father's calling of her name and falls off the branch, but lands safely on the ground using her acrobatic skills. She explains to her father that the orchid will put the Blue garden to shame, but her father forbids her to retrieve it due to his over-protectiveness and her "delicateness." At night, she grabs a fishing pole from a sleeping gnome fisher and sneaks off to get the orchid, wearing a black sock retrieved by Nanette as a disguise/camouflage. When she gets to the top of the greenhouse and grabs the flower, she meets Gnomeo, and it's love at first sight. The two playfully chase each other and snatch the orchid back and forth. When they fall into a pond, the water removes the sock from her and washes off the mud on Gnomeo, allowing them to see each other's (literal) true colors; she'a as shocked about Gnomeo being a Blue as Gnomeo is shocked about Juliet being a Red. Juliet runs as fast as she can to get away from Gnomeo and bumps into Tybalt.

When Nanette notices that Juliet had returned empty-handed in a daze, she infers that Juliet had met a boy. When Juliet tells her friend about Gnomeo and the fact that he is a Blue, Nanette excitedly tells Juliet that their love is doomed. Juliet, paralleling the famous to balcony scene, talks to herself as if she was talking to Gnomeo, saying that she doesn't want their colors to keep them apart. When Gnomeo appears, wanting to see her again, Juliet worries that about her dad finding him and killing him, specifically burying him under the patio. Juliet keeps her dad busy while Nanette shows Gnomeo out the door. Juliet, wanting to see Gnomeo one last time, climbs on the fence (on Nanette's back) and comes face to face with Gnomeo again, who brings her the orchid as a token of his affection. Gnomeo and Juliet make an agreement to meet at the old Laurence place at 11:45.

After getting ready for her date, Juliet is on her way to meet Gnomeo when her father stops her and has her meet Paris, a geeky gnome with a passion for botany, to set a companionship between them. Juliet, not wanting what Nanette called a "love triangle," has Nanette distract Paris while she goes on her scheduled date with Gnomeo. During their date, Juliet and Gnomeo find a vintage lawn mower and met Featherstone, a plastic flamingo. Juliet drives the mower and mows enough grass to make a giant heart with the G+J initials inside. Juliet confesses to Gnomeo that she had never driven a mower before, and that her dad was overprotective. The couple decide to meet again at the same place tomorrow and depart for the day.

Later, Juliet listens to Paris' rusty singing when she notices that Nanette was falling in love with him and vice versa. Then, she sees Gnomeo come into the garden from a hole that was dug under the mouth of the lawn hippo. Juliet runs up to see him only to find him pointing a gun full of weed killer at her. She realizes that Gnomeo was actually going to spray weed killer on the Red garden's prized tulips. Juliet storms away to the Laurence place with Gnomeo following her, trying to explain that he was going to avenge the Blue garden for the destruction of their wisteria. When their argument causes them to yell at Featherstone, they go to find Featherstone to apologize, only to find him in the shed where he explains that other people's hate had taken his love away. When Gnomeo decides that he and Juliet should build a new life there and never go back to their respective gardens, Juliet isn't sure about leaving behind her old life at first, but then agrees.

Juliet is about to kiss Gnomeo when Benny, sees them together and ran away shocked. Juliet watches in horror as Gnomeo fights Tybalt in the alley to avenge Benny's loss of his hat; the fight ends with Tybalt crashing into the wall despite Gnomeo's warning. Juliet defends Gnomeo when Tybalt's goons try to avenge Tybalt by attacking Gnomeo, causing him to fall onto the road where a truck drives and appears to have smashed him. Juliet is heartbroken by Gnomeo's "death" and is glued onto her pedestal by her father and the red gnomes, as Lord Redbrick doesn't want to lose her like he lost her mother. When Benny brings in the Terrafirminator to avenge Gnomeo, Juliet watches in horror as both sides of the garden fight each other, ruining each other's gardens. Juliet soon hears a familiar voice, and turns to find Gnomeo still alive and in one piece. Gnomeo runs onto the pedestal to try to free Juliet from the glue, but the Terrafirminator goes out of control and crashes into the pedestal; Juliet tells Gnomeo to go, but he refuses to leave her. When it seems like Juliet and Gnomeo are dead, Lord Redbrick and Lady Blueberry decide to end the feud for good. Lord Redbrick accidentally steps on the switch that causes the pedestal's display to knock over the rocks, revealing that Juliet and Gnomeo are still alive. With both sides having peace and harmony, Juliet and Gnomeo are married. 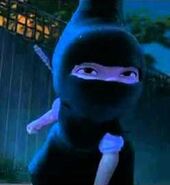 Retrieved from "https://disney.fandom.com/wiki/Juliet_(Gnomeo_%26_Juliet)?oldid=4350000"
Community content is available under CC-BY-SA unless otherwise noted.