Jungle from The Jungle Book

The Jungle of Africa is the main setting from Disney's 1999 animated feature Tarzan, its sequel, midquel, and television series.

In the Tarzan franchise, the jungle is the home of Tarzan, his wife Jane, and his mother Kala. It is also the habitation of Tantor and Terk and the other elephants and gorillas, as well as other creatures, such as baboons, crocodiles, and leopards. Tarzan was abandoned in the jungle as a baby and raised by Kala and Kerchak's gorilla family, with Terk becoming Tarzan's closest friend and Tarzan becoming one with many of the jungle's natives. When Tarzan grew up, he met another human in the jungle named Jane Porter, who became his love interest and eventual wife. He also had to contend with two foes: Sabor, a leopard who killed Tarzan's biological parents when he was an infant, and Clayton, a poacher who intended to kill Tarzan and his gorilla family. Outraged at the intrusion, the jungle bands her inhabitants together with Tarzan and his human allies, who expel Clayton's goons from the jungle. Though Clayton is killed when he is hanged by a vine, the jungle loses Kerchak when he is shot and brings a rainstorm to show its sadness at his passing.

The Jungle, known as the Deep Jungle, is a world that appears only in Kingdom Hearts. It is home to Tarzan and his ape tribe, as well as a group of explorers trying to learn more about the gorillas. Deep Jungle is the only Disney world from the original Kingdom Hearts that does not appear in Kingdom Hearts: Chain of Memories, any other game, or the manga adaption. This is most likely due to the estate of Edgar Rice Burroughs still holding copyrights to the Tarzancharacter and later Tarzan books still under copyright, and Square Enix unable to secure the rights to use them. However, it did appear again for Kingdom Hearts HD I.5 ReMIX.

Artwork of the treehouse's interior 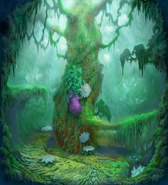 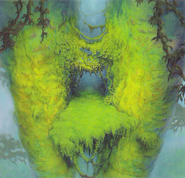 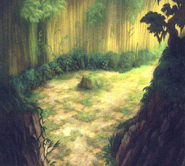 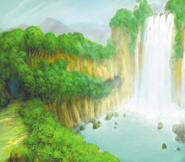