Junior[1] (voiced by Diedrich Bader)[2][3] is a minor character from the animated Disney Channel show Kim Possible. He is a regular in detention at Middleton High School. He appears to get along well with his other detention mates, Vinnie and Big Mike.

Junior doesn't appear to be that intelligent. He looks into the detention room asking if it is the assembly, to which Mr. Barkin tells him to sit down because it is detention. Later, after Vinnie states that Dr. Drakken is using a Gravatomic Ray, Vinnie mixes up the name and calls it a "gravamatromic" ray. Although, in a Ron-esque moment of insight Junior is the one who states that it is a "tiny explosive device" attached to Kim Possible's nose.

(Junior is intently staring at Kim Possible)
Kim: What?!
Junior: Never been this close to a cheerleader. Your skin is so smooth and zit-free. Like a baby's bottom.
Kim: Eww! 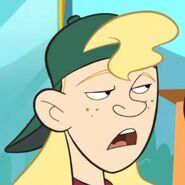