1920s-1977
Junius Conyers Matthews was an American actor and radio performer, who became the original voice of Rabbit in Disney's Winnie the Pooh franchise. A role he would play from 1966 to 1977. He also voiced Scottie in One Hundred and One Dalmatians and Archimedes the owl in The Sword in the Stone and All About Dragons.

Born in Chicago Illinois; Matthews was determined to become a performer and would get his start on Broadway with shows, like Young Wisdom and Any House before landing the role of Bud Morgan in the silent film, The Silent Witness. His acting career was briefly halted when he became a private in World War I. He returned to acting after the war.

Matthews worked primarily in stage shows in the 1920s, like Pot Luck, The Dybbuk, The Taming of the Shrew, and various productions of The Grand Street Follies, but found steady work in radio where he would continue to work for much of his life. One of his earliest radio roles was the Tin Woodsman in a production of The Wizard of Oz. His other known roles included Wichita on CBS Radio's Luke Slaughter of Tombstone and various characters on Crime Classics, Sherlock Holmes, Land of the Lost, and Yours Truly, Johnny Dollar.

While appearing in movies, like Black Angel, A Summer Place, My Wife’s Best Friend, The Lineup, and Half Angel; Matthews appeared very little in film and television and was often uncredited in those roles. He would gain mainstream recognition with his contributions to Disney.

In 1977, Matthews suffered a stroke that nearly left him unable to work. He died at age 87 of natural causes in Los Angeles in 1978.

Scottie
(One Hundred and One Dalmatians)

Archimedes
(The Sword in the Stone and All About Dragons) 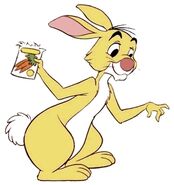