2
Jurnee Diana Smolett Bell is an American actress and voice known for her role as Jess Merriweather on the Emmy Award-winning TV series, Friday Night Lights. She is also known for her roles in Eve's Bayou, The Great Debaters, and True Blood, as well as Jason Katims' NBC show, Parenthood.

For Disney, she voiced Chrysta in the Disney Junior animated series Sofia the First. 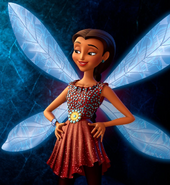 Chrysta
(Sofia the First)
Add a photo to this gallery

Jurnee Smolett-Bell speaks at the Underground panel at the WGN portion of the 2016 Winter TCA Tour.

Retrieved from "https://disney.fandom.com/wiki/Jurnee_Smollett-Bell?oldid=3888062"
Community content is available under CC-BY-SA unless otherwise noted.