1994-present
Justin Tyler Berfield is an American actor, writer, and producer who is best known for his role as Reese on the Fox sitcom Malcolm in the Middle from 2000 to 2006.

For Disney, he voiced Gil Moss on the Disney Channel animated series Kim Possible and made a small cameo as a caption writer in the 2001 Disney film Max Keeble's Big Move. 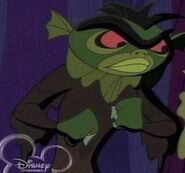 Retrieved from "https://disney.fandom.com/wiki/Justin_Berfield?oldid=4316055"
Community content is available under CC-BY-SA unless otherwise noted.