January 18, 2015 – February 2, 2018
K.C. Undercover is an American sitcom developed for Disney Channel, created by Corinne Marshall and executive produced by Shawn Levy. The series stars Zendaya as K.C. Cooper, a high school student training to follow in her parents' footsteps as an undercover spy.[1] The series was released on January 1, 2015 with a sneak peek, followed by the television premiere on January 18, 2015.

On August 9, 2017, Zendaya announced the series was cancelled and would end production after its third season.[2]

The series follows K.C. as she trains to be an undercover spy to follow in her parents' footsteps. Each episode centers on the family as they contend with everyday familial issues - while also performing missions to save the country. 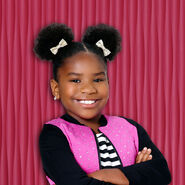 This is the robot, Judy