His paint getting chipped, Mater

“You cannot defeat me!”
―Kabuto to Mater

Kabuto is the main antagonist of the Cars Toons episode Tokyo Mater, also making a cameo in Cars 2.

Kabuto is a car who sports many modifications. His main color is gray, but his modifications located above his windshield and headlights and on his bumper and fenders add the color black, plus some red lining. His sides include long rectangles that have red dots and white squares, and he has three spoilers located at the back, plus a yellow modification on his roof. Black is also located on his rims, that all have red outlining. In Tokyo Mater, he has green eyes, but they are brown in Cars 2.

His appearance highly resembles Boost, plus taking resemblance to a 1999 Nissan Silvia (S15) with a custom body kit that resembles the racecars used in the JGTC. According to concept art for Cars: Race-O-Rama, he has a license plate that reads "BNZAI".

Kabuto is a master at racing, which is what he used to try and beat Mater. He is also good at drifting, as shown when he took a sharp corner and climbed up Tokyo Tower.

Kabuto is known as one of the drifters who occasionally races other people around Tokyo, as well as having his own gang of ninjas. One night, when Mater takes Ito-San to Tokyo, he inadvertently touches Kabuto's paint while he is amazed by the other residents' appearances. Frustrated, Kabuto demands a drift race versus Mater. With his own modifications, Mater is prepared for the street race, but Kabuto is not completely convinced that he is fit to race. The aim of the race is to drive through the streets of Tokyo and reach the top of Tokyo Tower. The winner will become "king of all drifters", while the loser will lose all of his modifications and become nothing but stock, as Kabuto roguishly smiles. For the start of the race, Kabuto draws in front and takes easy drifts around the corner, while Mater is struggling to do what he does. Intentionally, Kabuto taunts Mater, saying that he is not good at drifting, and speeds up as Mater intends to pay him back.

For a half-minute, Kabuto loses Mater, but after dealing with oncoming traffic and a police car, Mater catches up with Kabuto, who is not done yet, as he summons his ninjas to attack Mater. Suddenly, out of nowhere, Lightning Dragon McQueen appears and uses his karate moves to take the ninjas out. However, Kabuto is already nearing the tower, so McQueen and Mater take a shortcut through the construction site, eventually shooting Mater out of a pipe and back on the track in front of Kabuto. This time, Kabuto is enraged, and follows Mater up the tower, notifying him that there is no way he will win, though Mater believes otherwise. Having enough of him, Kabuto rams Mater off the tower, but by the time he reaches the top, he finds Mater already there, as he had grabbed the tower's antenna with his tow hook. Much to his dismay, Kabuto loses all of his modifications, and even his own ninjas laugh at his "stock" appearance.

Kabuto cameos in the film in several of the scenes taking place in Tokyo. Firstly, he is seen as one of the people who roam on the same street as McQueen, Mater and their team after they arrive in the city for the World Grand Prix. Secondly, he attends the World Grand Prix opening ceremony with Yokoza, Chisaki, Ichigo, Harumi and Suki, watching Miles Axlerod's presentation. Both appearances show that Kabuto has all of his modifications back.

Kabuto appears in a minigame that is based on the short Tokyo Mater, being the opponent that the player has to beat while playing as Mater and driving through the streets of Tokyo (also having to dodge some oncoming traffic), the construction site, and up the tower. He only appears in single-player mode, since the split-screen mode has Dragon McQueen in his place.

Apart from clips shown from the Tokyo Mater short, Kabuto does not appear much in the game despite his role in the short, though his ninjas do get summoned in the third level like in the short. His only appearances in the game are when the player gains on him just as they reach the top of the tower in the final level, and during the ceremony that shows which player has won in story mode.

Kabuto's Defeat as he completely stripped

Kabuto's other appearance in Cars 2 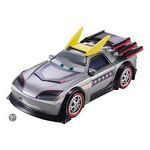