Clan Ishimura
Kai is a minor character from Disney's Gargoyles. He is a gargoyle, and the leader of Clan Ishimura. He is voiced by Clyde Kusatsu.

Despite his age, Kai is still a strong warrior. Like most his clan, he has black hair and two sets of horns. His brow horns are very similar to Goliath's and he has a larger set of horns behind those. He has greenish skin and wing coloration. His more unusual features are the spikes on each cheek and wrists and his tail which ends in a pointed blade. His wings are unique in that they have typical gargoyle wing ribbing, but also sport three small "fingers," giving him more digits on his wings than any gargoyle seen elsewhere so far.

Kai lived a peaceful life among the gargoyles and humans of Ishimura, Japan. In 1996, Yama betrayed the clan by aligning himself with a human named Taro, a former student of Kai, who claimed to be creating an theme park about gargoyles to spread Bushido to the children of the world. To that end, Yama planned in secret with Taro to move the clan from Ishimura to the theme park. After this plan began to unfold, Clan Ishimura met the Avalon travelers.

Goliath, Angela, Bronx, Kai, and the remaining gargoyles of Clan Ishimura were taken to the theme park based on gargoyles during the day. Taro told Kai the same story he'd told Yama, but Kai eventually decided not to keep the clan there, despite Yama's protests. Taro responded by hitting Kai with a tranquilizer dart. While Kai was unconscious, Yama realized the error of his ways and defeated Taro. After Kai regained consciousness, he and the clan went back to Ishimura, where they still live to the present.

Shortly after returning from Taro's Gargoyle World Kai banished Yama until such a time that Yama had decided he had regained his honor. 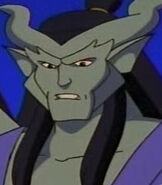 Retrieved from "https://disney.fandom.com/wiki/Kai_(Gargoyles)?oldid=3792379"
Community content is available under CC-BY-SA unless otherwise noted.