Start a Wiki
Kai is a character and antagonist from Kickin' It. He appeared twice in the episodes "Kickin' It in China" and "Win, Lose or Ty".

Jack and Kai were both taught by their grandfather, (who also taught Bobby Wasabi). Unlike Jack, who cares about discipline and respect, Kai cares more about winning and is very competitive. He defeated Jack so badly, Jack quit karate until he moved to Seaford. Since then, he and Jack don't get along and have a type of rivalry. He later came to Seaford and joined the Black Dragons because he heard they were Jack's rivals. 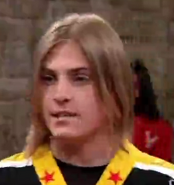 Retrieved from "https://disney.fandom.com/wiki/Kai_(Kickin%27_It)?oldid=3963138"
Community content is available under CC-BY-SA unless otherwise noted.