January 3, 2021 (original)
Kali River Rapids is an attraction at Disney's Animal Kingdom theme park, in the Asia area. It is themed as a rafting expedition along the Chakranadi River, courtesy of "Kali Rapids Expeditions". In keeping with Animal Kingdom's message of conservation and environmental protection, this attraction deals with illegal logging and habitat destruction.

On November 17, 2020, following Walt Disney World's reopening after being temporarily closed due to the COVID-19 outbreak's impact on Florida, Disney's Animal Kingdom announced that the ride would be closed for refurbishment from January 3-March 29, 2021, as part of Walt Disney World's 50th Anniversary celebration.[1][2]

The queue winds through several themed buildings, passing by ancient, decaying statues, shrines, overgrown ruins, and lush landscapes. Outside the temple there are many pairs of sandals lined up, reflecting the Asian custom of removing shoes before entering places of worship. As you approach the loading temple, you pass through a boathouse; the Proprietor of “Kali Rapids Expeditions” explains via a television screen their company’s mission: to show visitors the natural beauty of the area, she also warns of illegal loggers, and the dire ecological impact their actions have.

Moving into the brightly colored wooden temple, decorated with Tibetan prayer flags, guests are loaded from a rotating platform into their 12-person raft, with names such as, “Banyan Bay”, “Kali Bumper Car” “Manaslu Slammer” and “Sherpa Surfer”. As you leave the dock, you begin your adventure on the Chakranadi river; firstly ascending a 90-foot lift hill through jasmine and ginger scented mist. Once at the top, the raft floats through the path of gushing geysers, along the river past a waterfall, through dense tropical jungles where countless animal and bird calls can be heard.

The water becomes choppier and you start to hear the sound of chainsaws and the smell of smoke. Around the bend, the lush vegetation gives way to charred tree stumps, a fully-loaded logging truck that has slid perilously into the river tries in vain to drive itself out.

Moving further into a gargantuan pile of charred tree trunks the raft passes through a flaming bridge of felled wood, plummeting down a 30-foot drop. Traveling down the rapids, the raft passes waterfalls cascading down a granite rockface, before spinning and bumping its way along the white-water.

Passing through a cave, guests are dampened by dripping water, and by statues of water-carriers which spray water jets. Finally, the raft passes beneath a wooden bridge and past statues of elephants which also shoot water, however, these jets are controlled by guests standing on the bridge. At this point, the raft returns to the loading platform, and riders disembark.

The ride was briefly closed on May 29, 2007, after five visitors and one employee received minor injuries due to a loading platform malfunction. See Incidents at Disney parks for more information. 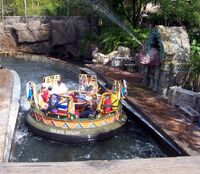 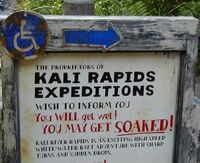 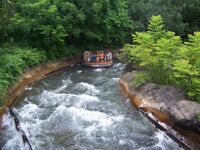