Ruler of Earth in the 41st century
Time-Traveller

To War Machine: "Enough! You wish to be Avengers, then share their fate."
"Your future ends here."
Kang is a conqueror from 41st century who opposes the Avengers.

Kang was created by Stan Lee and Jack Kirby.

Kang finds out his timeline is being erased, so he travels with his troops in the Damocles base to the present day to destroy Captain America, who seems to be the cause by surviving his apparent death in World War Two. Right before the time jump, Kang's wife Ravonna is trapped by the erasing effect but saved by Kang, which leaves her in an intermediate existence state.

Kang faces the Avengers, who refuse to turn Cap to him. After a fight, he returns to Damocles and sends an invasion force to take Earth. The Avengers defeat part of this force ant then find Damocles, where they face and defeat Kang, who is defeated and jailed. Henry Pym and Reed Richards take care of Ravonna to find a way to save her.

Time later, Kang remained imprisoned at 42. As the Avengers were becoming a problem in different timelines, the Council of Kangs decided to release hm with the purpose that he remove the Avengers from the timeline. After having escaped, Kang went to Stark Industries to use the arc reactor against the Avengers. Before disappearing, Iron Man asks Jarvis execute the program New Avengers. Later, Kang faced with the New Avengers. Eventually, he was defeated by the New Avengers, transported to another timeline and meets his final defeat for good.

When Hulk and Rick Jones see the Negative Zone portal, Rick mentions Kang as one of the villains who could have caused it.

When Iron Man accidentally ends up in Kang's time, Iron Man had a brief struggle with Kang before they end up back in the Avengers' time. Kang finds that A.I.M. has been harvesting his technology and takes control of the A.I.M. Agents present before disappearing. Kang later returned with his ship Damocles as the Avengers worked to prevent Damocles from firing a mega cannon that would annihilate Manhattan. Although the Avengers disable the cannon, Kang takes Damocles back to the 30th Century alongside most of the Avengers.The Avengers meet an elderly Thor, a future Black Widow, and several rebels who help fight Kang and his Kang bots. When Kang plans to use his device to travel to other worlds, Captain America grabs onto him as they both end up in World War II and then the Jurassic Period where their fight is interrupted by an Allosaurus. Afterwards, Captain America takes the time-travel device, leaving Kang stranded in the Jurassic Period. While angered that he was thwarted by the Avengers, Kang states that this setback will give him time to prepare. 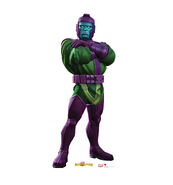 Add a photo to this gallery
Retrieved from "https://disney.fandom.com/wiki/Kang?oldid=4164649"
Community content is available under CC-BY-SA unless otherwise noted.