2010-present
Karan Brar is an American actor and voice actor. He is probably best known for his role as Chirag Gupta in the Diary of a Wimpy Kid films. He also played Cadet Suresh in the 2018 drama Pacific Rim: Uprising.

Brar is best known Disney role is Ravi Ross in the Disney Channel original series Jessie and the spin-off series BUNK'D. He had a guest role as Tito in the Disney XD series Pair of Kings. He also provided the voice of Prince Zandar in Sofia the First. In addition, he played George in in the DCOM Invisible Sister, and played Reza Alevia in the ABC TV show, Schooled. He currently plays Kevin Singh in Stargirl.

He also provides the voice of Prince Veer in Mira, Royal Detective.

Outside of Disney, before the company acquired 20th Century Fox, Karan voiced Mason in the 2014 DreamWorks movie, "Mr. Peabody and Sherman". 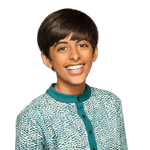 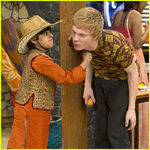 Karan Brar with his cast mates from Jessie in 2011.

Karan Brar during a Disney Channel Wand ID in March 2014.

Karan Brar during a Disney Channel Wand ID in June 2015.

Karan Brar and Cameron Boyce at the premiere of Star Wars: The Force Awakens in December 2015.