Jack
Karen Duffy is an American actress, voice actress, model, and television personality. She is known for many roles, such as J.P. Shay in the 1994 comedy Dumb and Dumber.

For Disney, she played Shay Stanley in the 1994 live-action film, Blank Check, and voiced Sketch in the animated TV series Pepper Ann. 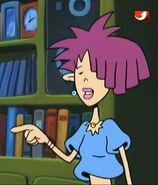