2006-present
Karen Sheila Gillan is a Scottish actress, voice actress, and former model, who is best known for her portrayal as Amy Pond in the BBC science fiction series Doctor Who from 2010 to 2012 and Ruby Roundhouse as one of the avatars in the 2017 film, Jumanji: Welcome to the Jungle.

For Disney, she portrayed Nebula in Guardians of the Galaxy, and reprised her role in Avengers: Infinity War, in Avengers: Endgame and in Thor: Love and Thunder. She also portrayed Morris in Fox's Stuber and Mercedes in Fox's The Call of the Wild, and she voiced Eyes in Fox/Blue Sky's Spies in Disguise. 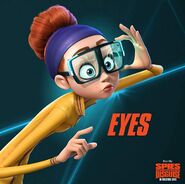 Eyes
(Spies in Disguise)
Add a photo to this gallery

Karen Gillan at Guardians of the Galaxy premiere in May 2014.

Karen Gillan at Avengers: End Game premiere in April 2019.
Add a photo to this gallery
Retrieved from "https://disney.fandom.com/wiki/Karen_Gillan?oldid=4563602"
Community content is available under CC-BY-SA unless otherwise noted.