Carla and Mila
Mladen George Sekulovich, better known as Karl Malden, was an American actor, who appeared in the Disney films: Pollyanna as Reverend Paul Ford and The Adventures of Bullwhip Griffin as Judge Higgins.

Malden, the eldest of three sons, was born in Chicago, Illinois, on March 22, 1912, which was his mother's 20th birthday and was raised in Gary, Indiana. His Bosnian Serb father was a milkman who had a passion for music and organized the Serbian Singing Federation, uniting immigrant choral groups across the United States. As a teenager, Malden joined the Karađorđe Choir at Saint Sava Serbian Orthodox Church, where his father produced plays and taught acting. After graduating from Emerson High School in 1931 with high marks, he briefly planned to leave Gary for Arkansas, where he hoped to win an athletic scholarship, but college officials did not admit him owing to his refusal to play any sport besides basketball. At the insistence of renowned director Elia Kazan, he changed his name to "Karl Malden" to make finding acting jobs easier.

After appearing on Broadway, radio, and films in the late 1930s, Malden joined the army where he served as a noncommissioned officer in the 8th Air Force of the United States Army Air Corps. While in the service, he was given a small role in the United States Army Air Forces play and film, Winged Victory. Malden was discharged in 1946 as a Sergeant and was awarded the Air Force Presidential Unit Citation, the American Campaign Medal and the World War II Victory Medal.

He then resumed his acting career where he primarily worked as a character actor in films, like A Streetcar Named Desire, On the Waterfront, I Confess, One-Eyed Jacks, The Gunfighter, Baby Doll, Fear Strikes Out, Time Limit, The Hanging Tree, Birdman of Alcatraz, Gypsy, How the West Was Won, The Cincinnati Kid, Patton, Beyond the Poseidon Adventure, and 'Meteor.

Rarely appearing on television beyond made-for-TV films, such as Captains Courageous, Skag, Miracle on Ice, Fatal Vision, Alice in Wonderland, and Call Me Anna, Malden landed the lead role of Lt. Mike Stone in the crime series The Streets of San Francisco, which ran from 1972 to 1977. He also appeared in commercials for American Express traveler's cheques in the 1970s and 1980s. He also advertised the American Express card, with the famous opening line, "Do you know me?" Malden was also President of the Academy of Motion Picture Arts and Sciences from 1989 to 1992. In 1997, Malden published his autobiography, When Do I Start?, written with his daughter Carla.

Malden died at his home in Los Angeles on July 1, 2009, at the age of 97 and was buried at the Westwood Village Memorial Park Cemetery in Los Angeles. 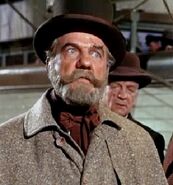