The natural laws of the universe

Sorcerers who bend the natural laws of the universe, ignore responsibility of protecting reality, or misuse their powers, recklessness

Karl Mordo is a character from Marvel Comics and a main character in the film, Doctor Strange.

Karl Mordo was created by Stan Lee and Steve Ditko.

Karl Mordo was a student of the Ancient One who overheard Stephen Strange asking people for directions to the Kamar-Taj. Strange was attacked by three muggers, but Mordo saved his life. 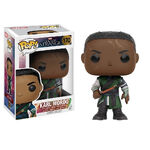 Mordo in Marvel: Contest of Champions