Karolina Dean is a Marvel Comics character that appears in the Hulu series Runaways, played by Virginia Gardner.  She is a member of an alien race called the Majesdanians who was raised on Earth. When she finds out that her parents came to Earth in order to conquer it, she joins the team of superhero fugitives known as the Runaways. Karolina has invisibility, intangibility, the ability to shoot beams of energy, and the ability to fly. She is generous, optimistic, gentle, and kind. 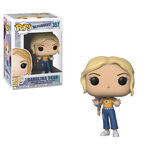 Retrieved from "https://disney.fandom.com/wiki/Karolina_Dean?oldid=3912274"
Community content is available under CC-BY-SA unless otherwise noted.