1998–present
Katherine Alexandra Hartford "Kat" Graham is a Swiss-born American actress, model, singer, and dancer. She is best known for her role as Bonnie Bennett on The CW supernatural drama series The Vampire Diaries.

For Disney, she played Jackie in The Parent Trap, Posse Member #2 in Lizzie McGuire, Alison in Hannah Montana, and a dancer in the Freeform TV show Greek. 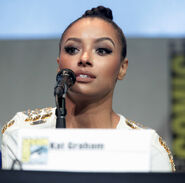 Add a photo to this gallery
Retrieved from "https://disney.fandom.com/wiki/Kat_Graham?oldid=3775539"
Community content is available under CC-BY-SA unless otherwise noted.