The Opry House
When the Cat's Away
The Karnival Kid

People intruding on his territory

Claws Nipp (sister)
Kat Nipp, whose name is a play on the word "catnip", is a antagonistic anthropomorphic cat. Kat Nipp is an often-drunk countryside tough guy who is a rival of Mickey Mouse. He is similar to Pete.

Nipp made his debut in the 1929 animated short The Opry House, in which he posed as a snake for a snake-charming act—continuing to smoke his pipe all the while. Nipp's other two appearances in animation also came in 1929, in When the Cat's Away, he played a woodsman whom left his house on a hunt leading mice to play around in his house.

The Karnival Kid, Kat Nipp was a barker advertising Minnie Mouse's shimmy dance at the carnival and got annoyed by Mickey's loud advertising of his hotdogs nearby. Later that night, Katt Nipp is awoken by Mickey and a pair of cats serenading Minnie in a nearby wagon, the angry Nipp quiets Mickey by tossing an entire bed at him. The catoon introduced Nipp's habit of physically abusing Mickey, hereby stretching out Mickey's nose to a ridiculous length.

Kat Nipp reappeared in a 1931 sequence of the Mickey Mouse newspaper comic strip, "Mickey Mouse vs. Kat Nipp". Katt Nipp was redesigned to be short, presumably to distinguish him from Pete. In the story, Mickey starts intruding around Kat Nipp's secluded shack, taking his signs warning trespassers to be wary of his wrath as a challenge. Angered that Mickey ignored his signs, Kat Nipp retaliates by continually tying Mickey's tail in knots. Mickey vows to not untie said knots until he gets even with Kat Nipp. Kat Nipp was also used in the strips produced in Britain for the Mickey Mouse Annual. However, the character quickly faded away and has made only a handful of appearances in comics since the mid-1930s.

In 2019, Kat Nipp appeared in Kingdom Hearts III, being featured as a background character in a mini-game inspired by The Karnival Kid.

In the comics, Kat Nipp is a grouch who is territorial and dislikes unwelcome visitors. According to recent comics, he was once in jail for an unknown crime. Despite this, Katt Nipp is only antagonistic if provoked, and with the exception of Mickey, is friendly to most of the citizens of Mouseton. Some of his friends include the sailor Barnacle Bill and the unnamed son of the local baker. 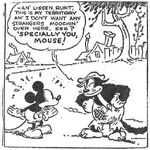