3
Catherine Louise "Katey" Sagal is an American actress and singer-songwriter who is best known for her role as Peggy Bundy in Married... with Children, Gemma Teller Morrow on Sons of Anarchy, and for voicing Leela on the animated, science fiction series Futurama.

For Disney, she portrayed Pat, the Smart House in the 1999 Disney Channel Original Movie, Smart House, Cate S. Hennessy in the ABC TV show, 8 Simple Rules, Ashley in The Geena Davis Show, Marci Klein in Eli Stone, Harriet Magnum in Mr. Headmistress, Teresa in Grand Hotel and Helen Norwood in Lost. She also voiced Flo Spinelli in Recess and Recess: School's Out and Monica the Police Officer in Higglytown Heroes.

Cate Hennessy
(8 Simple Rules)
Add a photo to this gallery 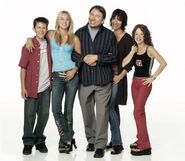 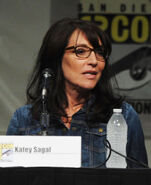 Katey Sagal at her Hollywood Walk of Fame ceremony in September 2014.

Katey Sagal speaks onstage during the CBS portion of the 2017 Winter TCA Press Tour.
Add a photo to this gallery
Retrieved from "https://disney.fandom.com/wiki/Katey_Sagal?oldid=3789905"
Community content is available under CC-BY-SA unless otherwise noted.