Slowly dies laughing after being bitten by a yellow-spotted lizard
Katherine "Kissin' Kate" Barlow is a recurring antagonist in the 2003 live-action film, Holes.

Kate Barlow first starts out as Miss Katherine, Green Lake's schoolteacher, who is locally famous for her beauty and spiced peaches. When the roof on the schoolhouse leaks, she asks Sam the Onion Man, who is African American, to repair it in exchange for jars of spiced peaches. She makes up more and more excuses of problems in the schoolhouse to be near Sam. One day, Katherine and Sam kiss. Trout Walker, the richest man in the town, spots them. The schoolhouse is burned down and Sam, and his beloved donkey, Mary Lou, are killed.

Kate is heartbroken. Three days later, Kate shoots the Sheriff and gives him the kiss he asked for the day Sam was killed. She then became the infamous outlaw, "Kissin' Kate Barlow" (she only kissed the people she killed). During this time, she robs Stanley Yelnats I, strands him in the desert, and buries the treasure. Twenty years later, Kate returns to Green Lake and is confronted by Trout Walker and his wife, Linda Walker (nee Miller), one of Kate's former students. Trout and Linda demand to know where the hidden treasure is. Kate refuses to tell them and says, "Go ahead and kill me, Trout, but I sure hope you like to dig, 'cause you're going to be digging for a long time. It's a big, vast wasteland out there. You, your children, and your children's children can dig for the next hundred years, and you will never find it." During this time, a venomous Texas Yellow-Spotted Lizard crawls out and Kate allows it to bite her arm.

She dies laughing, and says to Trout; "Start digging, Trout." 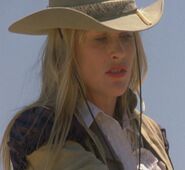 Retrieved from "https://disney.fandom.com/wiki/Katherine_Barlow?oldid=3682251"
Community content is available under CC-BY-SA unless otherwise noted.