2
Kathryn Marie Hahn is an American actress and comedian. She is known for playing Lily Lebowski on the television series Crossing Jordan and Carla Dunkler in the 2016 comedy Bad Mom and its 2018 sequel. She also appeared in various films, such as How to Lose a Guy in 10 Days, Anchorman, Step Brothers, and We're the Millers. Additionally, she voiced Erika van Helsing in Hotel Transylvania 3: Summer Vacation and Olivia Octavius/Doctor Octopus in Spider-Man: Into the Spider-Verse.

For Disney, she played Ursula Gernsback in Tomorrowland and Michelle in the 2005 Touchstone Pictures film, A Lot like Love. She also played Agatha Harkness in WandaVision. Additionally, she provides the voice of Paige Tillerman in the Apple TV+/20th Television series Central Park. 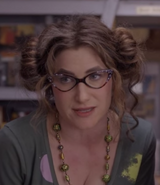 Agatha Harkness
(WandaVision)
Add a photo to this gallery

Kathryn Hahn attending the 2019 Toronto International Film Fest.
Add a photo to this gallery
Retrieved from "https://disney.fandom.com/wiki/Kathryn_Hahn?oldid=4577487"
Community content is available under CC-BY-SA unless otherwise noted.