Matt Moline (2001-2006
Randy Bick (2020-present)
Kathleen Mary "Kathy" Griffin is an American actress and comedian, who is best known for her role as Vicki Groener on the NBC sitcom Suddenly Susan from 1996 to 2000 and for appearing on the Bravo reality series Kathy Griffin: My Life on the D-List from 2005 to 2010. Born in Oak Park, Illinois, she moved to Los Angeles, California in 1978, where she studied drama at the Lee Strasberg Theatre and Film Institute and became a member of improvisational comedy troupe The Groundlings.

Her Disney roles include Mary in the 1995 remake of The Barefoot Executive and the 1997 Wonderful World of Disney episode "The New Barefoot Executive", a fashion TV anchor in Ugly Betty, herself in the 1994 Touchstone Pictures film, It's Pat and Roxanne Gaines in Spider-Man: The New Animated Series. She also confirmed on Twitter that she filmed a cameo for The Muppets, alongside Ricky Gervais and Billy Crystal, but her scenes were cut from the final film, alongside Gervais's and Crystal's appearances.

Kathy Griffin with Scooter and Sam the Eagle in a deleted scene from The Muppets.

Kathy Griffin speaks at the Makers: Women Who Make America panel at the 2014 Winter TCA tour. 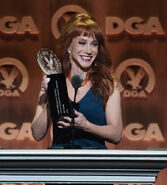