3
Katherine "Katie" Leigh is an American actress and voice actress who is best known for her roles as Connie Kendall on the Focus on the Family radio program Adventures in Odyssey since 1987. She is also well-known for her voice roles in both television and film, including Maharajah in Indiana Jones and the Temple of Doom, Alexandra and Carmen in Totally Spies!, and Baby Rowlf in the original Muppet Babies series.

Leigh's Disney roles include Sunni Gummi, Boy, Rafi, and Young Woman in Gummi Bears, Honker Muddlefoot and a tour guide in Darkwing Duck, Dumbo in Dumbo's Circus, additional voices in the Aladdin TV series and the Quack Pack episode "Island of the Not-So-Nice", Bell in the Bonkers episode "Miracle at the 34th Precinct", and Han Solo, Mari Amithest, and Ashla in Lego Star Wars: The Padawan Menace. 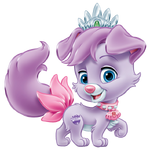 Matey
(Palace Pets)
Add a photo to this gallery 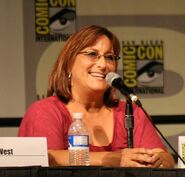 Katie Leigh speaks at the 2011 San Diego Comic Con.
Add a photo to this gallery
Retrieved from "https://disney.fandom.com/wiki/Katie_Leigh?oldid=4533204"
Community content is available under CC-BY-SA unless otherwise noted.