2
Katie Quinn Lowes is an American actress, voice actress, and theater director, who has voiced Candlehead in Wreck-It Ralph, additional voices in Frozen, Kirby in Feast, Abigail Callaghan in Big Hero 6, and Dr. Madge Honey Badger in Zootopia. She reprised her role as Candlehead in Ralph Breaks the Internet.[1]

In the Google talks interview with key members of the Zootopia cast, it was revealed that Lowes had a friend who was an animator at Walt Disney Animation Studios. This association gave her the opportunity to provide scratch voices for upcoming projects at the studio.

Lowes was born in Queens, New York City. She graduated from New York University's Tisch School of the Arts with BFA in acting, and was later cast in the stage play, Four Saints in Mexico. In 2004, her first screen role in the FX series, Rescue Me, and later co-starred opposite Marcia Gay Harden in the Showtime pilot, Hate. Lowes later guest starred in the number of television series, including The Sopranos, Without a Trace, NCIS, Ghost Whisperer, Castle, Leverage, and The Closer. In 2008, she starred opposite Laurie Metcalf in The CW short-lived comedy-drama series, Easy Money. In addition to her television performances, Lowes appeared in a number of low-budget films, including The Job (2009), Bear (2010), and Café (2011).

Lowes is best known for her role as Quinn Perkins, formerly Lindsay Dwyer, in the ABC political drama series, Scandal created by Shonda Rhimes. Before Scandal, Lowes had guest roles on Shonda Rhimes' Grey's Anatomy and Private Practice. Before landing her breakout role on the show, she worked as a nanny for Connie Britton's adopted son.

Lowes lives in Los Angeles with her husband, actor Adam Shapiro, their son, Albee, and their daughter, Vera. Shapiro played her character's boyfriend in an episode of Scandal. 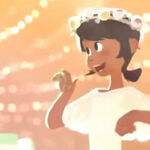 Katie Lowes at the Zootopia Red Carpet premiere in February 2016.