Waipo Chen (grandmother)
Unnamed grandfather †
Katy Chen (known in Mandarin as Chen Ruiwen) is a Marvel Cinematic Universe character who appears in Shang-Chi and the Legend of the Ten Rings, played by Awkwafina. She is Shang-Chi's best friend, working as co-valet alongside Shang-Chi (going by "Shaun"). As the Ten Rings targets Shang, she gets accidentally pulled into the adventure, helping Shang protect his mother's village from Wenwu, from the Ten Rings, and from the Dweller-in-Darkness as an archer. Katy is quirky, but friendly and gentle. 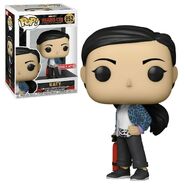