Kazuda "Kaz" Xiono is the protagonist of the animated series, Star Wars Resistance. He is a young piloted recruited into the Resistance, tasked with a top-secret mission to spy on the growing threat of the First Order.

Kazuda Xiono, who went by the nickname "Kaz; he was a confident and skilled X-wing pilot for the New Republic after the end of the Galactic Civil War. Concerned by the First Order's growing influence, the Resistance sought to protect the Republic by gathering information relating to the First Order's growing military strength. Kaz's new assignment would be enlisted as a spy for the Resistance; to gather as much information as he could on the station's views concerning the Republic and First Order, as well as to determine which side the population ultimately supported. This assignment felt out of his element. Now living on the independent fueling station known as the Colossus, Kaz is doing his best to fit in as a mechanic so he can carry out his mission.

Sometime later, Kazuda along with Torra Doza and Jarek Yeager participated of the Battle of Exegol between the Resistance and the Sith Eternal, and the three of them survived. 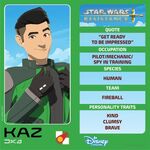