Edie & Delilah Righton
Keira Christina Knightley, OBE, is an English actress, singer, and model, who played Elizabeth Swann in every film of the Pirates of the Caribbean series, excluding the fourth. Other Disney roles include Gwyn in Princess of Thieves, Sabé in Star Wars Episode I: The Phantom Menace, the Sugar Plum Fairy in The Nutcracker and the Four Realms, and Guinevere in King Arthur.

Amongst her notable non-Disney roles, include Pride and Prejudice (2005) and The Imitation Game (2014), both of which earned her Oscar nominations 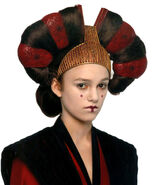 Keira Knightley at premiere of Pirates of the Caribbean: Dead Man's Chest in June 2006. 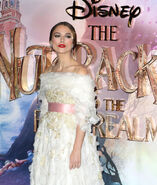 Keira Knightley at premiere of The Nutcracker and the Four Realms in October 2018.
Add a photo to this gallery

Retrieved from "https://disney.fandom.com/wiki/Keira_Knightley?oldid=4470721"
Community content is available under CC-BY-SA unless otherwise noted.