Kristen Shean (m. 2013)
Keith Coogan is an American actor and voice actor who voiced young Tod from The Fox and the Hound, and portrayed D.B. Reynolds form Spooner, Brad Anderson from Adventures in Babysitting, and Ted Johnson from Cheetah.

Keith Eric Mitchell was born on January 13, 1970 in Palm Springs, California, the son of Leslie Diane Coogan Mitchell, an actress. He changed his name to "Keith Coogan" in 1986, two years after the death of his grandfather Jackie Coogan. He married Kristen "Pinky" Shean on October 26, 2013, which would have been his grandfather's 99th birthday.

Coogan began acting in commercials at the age of five, but appeared on TV as early as two years old. As a child, he appeared on episodes of Little House on the Prairie, The Waltons, The Love Boat, Fantasy Island, Laverne & Shirley, Mork & Mindy, Eight Is Enough, Knight Rider, Growing Pains, Silver Spoons, Fame, and CHiPs.

In 1982, Coogan also appeared as 'William' in the adaptation of Ray Bradbury's All Summer in a Day that aired on the PBS series WonderWorks.

He has also starred in films including Adventures in Babysitting, Cousins, Hiding Out, Cheetah, Toy Soldiers, Book of Love, and Don't Tell Mom the Babysitter's Dead, as well as straight-to-video releases such as Python, Soulkeeper, and Downhill Willie. He guest-starred on Joan of Arcadia and Married to the Kellys.

His theater credits include John Olive's The Voice of the Prairie, James McLure's Pvt. Wars, and an unfinished Louisville work by Marsha Norman, The Holdup. All were performed at Timothy and Buck Busfield's "B" St. Theater in Sacramento, California, during the 1992 and 1993 seasons.

In 2008, he worked in Dallas, Texas, on a short film, The Keith Coogan Experience. On January 1, 2010, Coogan started the "Monologue a Day Project", where he learns a monologue or other short piece every day, "as inspired by Julie & Julia", and posts the resulting video performance on blogspot.com.

Coogan was featured in the mini-documentary, Simply Coogan – An Interview with Keith Coogan, released by Coogan on December 13, 2010, which coincided with his birthday celebrations.

Coogan hosted "The Call Sheet" on the SkidRowStudios.com radio podcast network, which was an entertainment industry-based show which also covered tech news and politics. 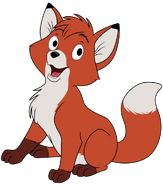 Tod (young)
(The Fox and the Hound) 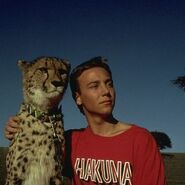 Ted Johnson
(Cheetah)
Add a photo to this gallery

Keith Coogan at the 61st Academy Awards.
Add a photo to this gallery
Retrieved from "https://disney.fandom.com/wiki/Keith_Coogan?oldid=3902312"
Community content is available under CC-BY-SA unless otherwise noted.