Agnes and Dulcie
Keith Silverstein is an American actor and voice actor who works for anime series and video games. Most of his voice-over career has been for anime, such as voicing Gantetsu and Kimimaro Kaguya in Naruto, dubbing Detective Kun-Kun in Rozen Maiden, Kazuo Aida in Honey and Clover, Vector the Crocodile in the Sonic the Hedgehog series, Torbjörn in Overwatch and Kenji Tsukino and Professor Souichi Tomoe of Sailor Moon and Sailor Moon Crystal. He also voiced Gregorio in the English dub version of Violetta, Hawk Moth in the English dub version of Miraculous: Tales of Ladybug & Cat Noir, and Ulric, Brute, and Rascal in Glitter Force. 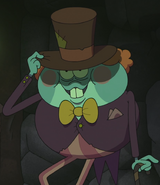 Barry
(Amphibia)
Add a photo to this gallery

Retrieved from "https://disney.fandom.com/wiki/Keith_Silverstein?oldid=4475016"
Community content is available under CC-BY-SA unless otherwise noted.